Home/Health and Wellness in Munich/Breast augmentation – popular surgery because of Munich’s Oktoberfest? 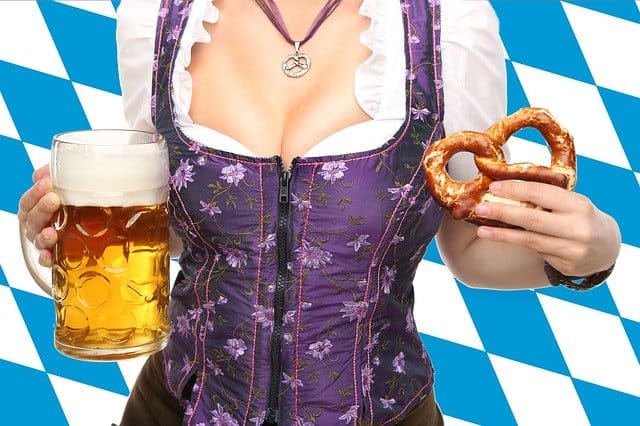 The Munich Oktoberfest, or the “Wiesn” in dialect, is a folk festival that has been held annually on Munich’s Theresienwiese since 1810. Year after year, countless tourists come to see the world’s largest folk festival. Munich is also always worth a visit: the Hofbräuhaus, Marienplatz, Nymphenburg Palace or the Allianz Arena, the stadium of the soccer club “FC Bayern Munich”, are just as recommendable as the Olympic Park, BMW World or the Hellabrunn Zoo.

If you are a guest at the Oktoberfest, you will soon notice that men wear leather pants and woman Dirndl. The genuine Bavarian will only go to the Wiesn in traditional clothing. What is important about a dirndl? The cleavage! Full-bodied dirndl blouses not only attract men’s attention, but also make many women turn green with envy. Most of them are not naturally blessed with a large bust or have not been at a plastic surgeon yet.

If you want your blouse to be fuller for the next Oktoberfest, you can make an appointment with a plastic surgeon working in Munich. He will then not only present the different methods of breast augmentations, but will also help you choose the right size of the implants. He will also inform you about possible risks and side effects.

The surgical techniques of breast augmentations at a glance

The implant can easily be pushed over or under the pectoral muscle through an opening of three to a maximum of four centimetres in length, which is created by an incision in the breast fold. This is the most common method because the resulting scar is only visible in a lying position, which makes it particularly easy to place the implant.

Another possibility is the access via the armpit. In this case, an approximately three centimetre long incision is made in a fold in the armpit. Then, by using a special endoscopic instrument with a built-in mini-camera, the position of the implant is planned. The implant is inserted through the opening in the armpit and placed on or under the muscle. This method is a minimally invasive procedure, which has the advantage that there is actually no visible scar left behind.

The breast implant can also be pushed into the breast via the nipple. In this case, a crescent-shaped incision is made around the areola. The implant is then pushed into a previously prepared pocket, which in this variant is always above the muscle. This method is suitable for relatively small implants or empty cushions that are only filled afterwards. It should be noted that this is the most difficult procedure, although the advantage is that no visible scars are left behind.

Together with the patient, the Munich beauty doctor will also have to clarify in advance whether the implant should be placed above or below the breast muscle. The advantage of breast augmentation with implants placed under the muscle is that the risk of having a problem with capsular fibrosis later on is low. This is a hardened capsule that forms around the inserted implant and causes pain. In addition, an implant placed under the pectoral muscle creates a more natural breast shape; the breast also feels naturally softer.

If you choose the version below the pectoral muscle the implant is not visible from the outside because the contours disappear completely. A palpability and visibility of the implant is therefore completely excluded. This variant is also suggested for slim patients, as they have very little subcutaneous fatty tissue.

Breast augmentation with autologous fat is possible, but can only be recommended to women who want only a very small change to their breasts or who sometimes want to have any asymmetries corrected. Because there are no incisions, no scars are left behind and there is no risk of the body rejecting its own fat.

It should be noted, however, that with this fat treatment, only half a cup size can be gained. So if you wish to have a significant increase in the size of your stem, it is essential to opt for implants. In addition, breast augmentation with autologous fat does not last forever, as the body can break down fat cells on its own.

If a long-lasting and visually impressive result is desired, the Munich physician will always refer to implants and oppose treatment with autologous fat. However, in the case of minor corrections, such as asymmetries, it may be considered whether this small blemish can be corrected with autologous fat.