The cliché of the backdrop glamour of architecture in Munich in the 19th century is no longer true to the Bavarian capital, which has become very modern in the meantime. It is not without reason that the façade award has been selecting Munich’s most beautiful façades for 40 years.

In the west of the city, the shimmering yellow ADAC headquarters has been shining as a new highlight of Munich’s city skyline since 2011. The city’s rise as a high-tech metropolis and expanded urban development opportunities are keeping construction activity thoroughly exciting. A “campus of ideas” is being created on the almost 100,000 square meter site of the former airport, Munich Riem, which has become vacant.

In impressive form, the successful combination of old and new can be seen through the Academy of Fine Arts in Akademiestraße. Large glass surfaces with nested pipes give the building an extraordinary shape. The architects have not even stopped at redesigning subway stations. Walls in neon colors or staged light installations spread a new atmosphere for waiting passengers. The group of architects was particularly courageous and thus revolutionary in the redesign of the technical college. The red concrete cube on reinforced concrete supports, which houses a lecture hall, is a striking feature here.

Architecture in gardens and parks in Munich 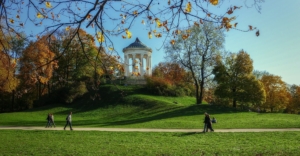 As the largest inner-city park in the world, the English Garden tops the list of Munich’s green spaces. The park got its name because the green spaces were laid out in the style of English landscape parks. Regardless of seasons, the English Garden is pure Munich lifestyle. A mecca for recreationalists, countless visitors come there even in the freezing cold to either jog, cross-country ski, take a stroll and explore the many sights, or simply settle down in the beer garden, at the Seehaus on Kleinhesseloher See. 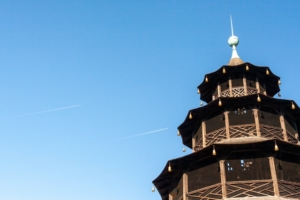 The landmark of the English Garden is the 25 meter high Chinese Tower. Directly connected and with almost 7000 seats, you can actually always find a free seat in one of the largest beer gardens in the city. Directly behind the Chinese is the classicist Rumfordschlössel, which is now mainly used as a cultural and nature meeting place for young people. A beautiful panoramic view over Munich is obtained from the temple-like rotunda Monopteros, which was inserted in 1836 along with the hill into the southern park landscape.

Park lovers will find a true oasis of relaxation directly behind Odeonsplatz in the center of Munich. This green space, which one enters through the majestic court gate, was created at the beginning of the 17th century under Duke Maximilian I. The round pavilion, the so-called Diana Temple, was laid out in 1615 by Heinrich Schön the Elder. From the eight arches of the pavilion the cross paths start. Surrounded by gravel paths, fountains and numerous flowerbeds, it itself often serves as a small stage for cellists, oboists and clarinettists, where they entertain visitors musically. Dancers also like to perform salsa, swing or tango there.

The gravel paths are ideal for boules players. Small tournaments are regularly held there. The shady seats of the well-known Café Tambosi on Odeonsplaz, which jut out into the courtyard garden, are also popular. Here you can enjoy an espresso or an aperitif in a special atmosphere.