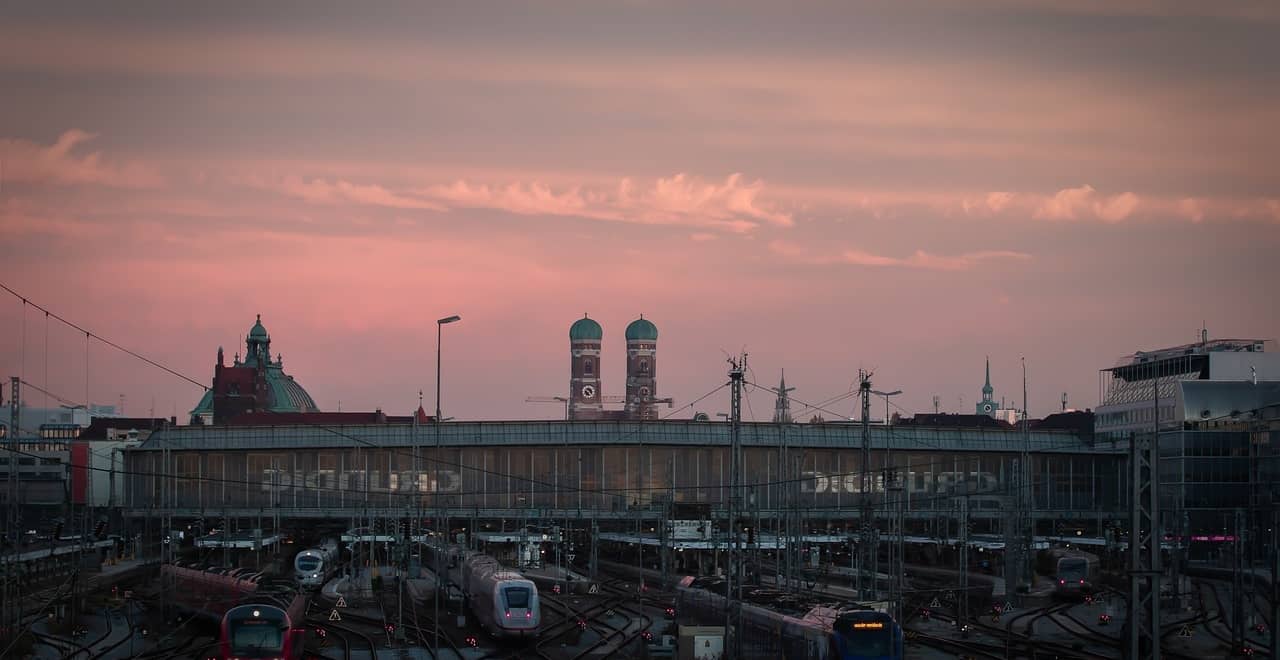 Today a very inconspicuous neighborhood on the outskirts of the city was formerly an important part of Munich’s urban development. What has shaped Laim and what is Laim today? An outline of Laim’s history, which should open the eyes of residents of the neighborhood and show visitors its hidden importance. Today I take you on a search for traces through the streets that have shaped most of my life and the recent history of Munich.

I grew up in Laim, my kindergarten, elementary school and after-school care center are located here. The high school I attended is just three minutes beyond the district’s borders, and the sports club I belonged to for years is the SV Laim, right behind the Laimer Anger. So Laim means “home” to me, with all the connotations that word brings. But only recently, after many years of not living in Laim anymore, I learned something about the history of my home.

I vaguely remember the “HSU – Heimat- und Sachkundeunterricht”, in which we learned minimal things about our district. Laim comes from Loco Leima “clay place” and was not always a part of Munich, then it was about the city history, St. Peter’s monastery and the many different tower shapes that the cathedral took over the years, the Bishop of Freising, bridges and dispute over salt duties. That Laim played a major role in the industrialization of the city I have either forgotten, or, and I think this is much more likely, was not even mentioned. No wonder, because how should elementary school students know what industrialization is?

One of my childhood friends and neighbors was the son of an author who writes crime novels and often uses the historical setting of Munich in those novels. According to one of her little-known short stories, a dead body was found in the freshly dug excavation pit during the construction of our apartment building. As a child, I was fascinated by the idea of filling a made-up story with the street names that ran all around me. Today, I’m still fascinated when I find out that the very spot where this very apartment building I grew up stands used to be the grandstand of a horse racing track.

The first visitor attraction, which also enjoyed some popularity, so much popularity that it was eventually torn down and moved, was the horse racing track near Laim. Today, only two tracks of this racetrack remain in Laim: The Potlatsch Restaurant and the Am Ziel Inn. The first used to be called zur Rennbahn and is sometimes still called that today. The Wirtshaus Am Ziel, however, does not quite rightly bear this name, since firstly the racecourse was round and thus had no clear destination, and secondly it is about 800 meters further west than the nearest point of the old racecourse. The northernmost point of this was today’s Stadtbibliothek at the Laimer Platz subway station, to the west Fürstenrieder Straße, to the east Friedenheimer Straße and to the south Kärtnerplatz.

If we move to the northernmost point of the former horse racing track, we are less than two minutes away from the Laimer PLatz subway stop. This was built in 1988 and connected the southern parts of the district, which are far from the S-Bahn, to passenger transport. Now let’s walk up Fürstenrieder and wonder about the name of this street. It is one of the oldest streets in Laim and does not lead at all in the direction of Fürstenried, but in the direction of Forstenried, and that is what the street used to be called. Only one cross street further about six minutes from Laimer Platz is the Subway, the Bücher Hacker and since recently a bicycle store. At the Subway, my schoolmates and I often spent our free hours, unaware that we were (s)eating at the site of a center of Socialist resistance against the National Socialists.

Margot and Ludwig Linsert were organized in the International Socialist Fighting League (ISK) and were involved in various resistance propaganda campaigns. Their store on Fürstenrieder Straße served as a safe haven and transit point for many ISK members on the run. They were arrested by the Gestapo in 1938, both survived imprisonment and were active in the DGB after the war.

Just a few meters further on at the intersection of Agnes-Bernauer and the streetcar station of the same name is the Fürstenrieder Straße elementary and secondary school. Which stands on the same spot as Laim’s first school building. With industrialization a larger school building had to be built. The final product is this magnificent building on this spot.

Agnes-Bernauer Street is named after the bathers’ daughter who was possibly married to the Bavarian Duke Albrecht III. Agnes was drowned in the Danube one day, accused of lying, witchcraft or adultery. A most vulgar fate for the time for women who did not want to submit unconditionally to the rule of their masters.

For a long time, historians assumed that the young woman had actually lived in the village of Laim, but it is now certain that she actually lived in Blutenburg behind Pasing. Nevertheless, the former “Pasinger Feldweg” (trail) was named after her.

The marshalling yard in Laim and its implications

If we turn left into Agnes-Bernauer Straße we come after about a 15 minutes walk to Agricolastraße. Through this street we can reach the restaurant Laimer’s, which is located in the same building as Laim’s only cinema, the new Rex. There used to be three cinemas on Fürstenrieder Strasse, but they have all been made redundant by the increasing use of television.

Agricolaplatz, however, is exciting for a completely different reason. Even at first glance, it is striking here that the big-city flair gives way to a much more village-like setting. In the center of the square is a small green area with a playground, and on the west side of the square is a small archway that forms the entrance to the so-called villa colony. This was built cooperatively in the course of the population increase at the end of the 19th century and served as housing for railroad employees. There are also housing projects of historical significance on the north side of the square. Theodor-Fischer, who resided at Laimer Anger in the Laimer Schlössl, built a housing estate here in terraced housing.

You will find traces of the railroad workers in several parts of Laim as you walk through the neighborhood. I didn’t discover the actual origin of these traces until I was doing research for this article. In the past, I often rode my bike through Guido-Schneble Street and imaginatively imagined what the locomotive engravings might be all about. The dates, which are also placed above the entrances, point us in the direction of the time of industrialization. At that time, Laim was very rural and there was enough space in the surrounding fields to build a marshalling yard, which was urgently needed around 1890. This station also led to the construction of the passenger station, which still exists today, for the then suburban railroad and regional traffic to the west and north. The construction of this station also led to the construction of the Laimer Unterführung (underpass), which is still one of the most important over (or under) passages of the main line today. Industry then settled around the station.

The industry around the station and the railroad led not only to intensive housing construction or, as south of Laim next to the Westpark, to the commissioning of a sanatorium, which until 2011 was a school for the deaf, but also to the establishment of several prisoner of war and forced labor camps.

One of these forced labor camps was located only two minutes away from a house where I spent a large part of my childhood. At Aindorferstraße, according to today’s situation in the area Byecher-, Camerloher-, Agricola- and Aindorfer Straße, about 1000 mostly Soviet forced laborers were housed in 22 barracks even before its completion in 1944. At the corner of Landsberger Strasse and Wotan Strasse there was a prison camp for people from the territories occupied by Nazi Germany. They were housed in barracks of the municipal transport company.

The National Socialists had big plans for Munich. For example, the main train station was to be moved to the level of today’s Friedenheimer Brücke, and Landsberger Strasse was to be converted into a main traffic artery and showcase street. The war and its costs got in the way of these plans. Laim would otherwise have been right next to the center of the movement’s capital. Instead, Laim became (possibly) an important site on the day of Munich’s liberation by the Americans.

At Egetterstraße 16, the city was officially handed over to the Americans on April 30, 1945. This information could not be verified one hundred percent before the editorial deadline, since the SZ did not respond in time to our inquiries about their article from which this information was taken.

The district of Laim today

Besides the already mentioned places, Laim has a few other nice gastronomic places to offer. For example, the Tou Bakali at the Laim S-Bahn station, a Greek specialty restaurant that is well worth a visit! Absolute classics for me used to be Deterbeck on Laimer Anger and MyStolz Burger house on Fürstenrieder.

Another Laimer specialty is vending machine sausage. The butcher Franz at Laimer Platz has a vending machine in front of the door, from which you can get fresh meat every day and every night. An guadn!

Laim can also score with culture in suburban flair. The Interim is located on Laimer Anger, where volunteers have created a venue for theater performances, exhibitions and concerts. It is organized by Bürgertreff Laim e.v., which is also active in other areas of the district, such as smaller art events and the Laimer Sommerfest.

Strictly speaking, the Westpark is not located in Laim. For me, it is nevertheless as much a part of my childhood and youth as the entire district, because my high school is right next to it. In another article we described what you can do in the Westpark and summarized the history. The former sanatorium Neufriedenheim or former school for the deaf is also located here. This is closed, of course, and should by no means be perceived as a place worth exploring!