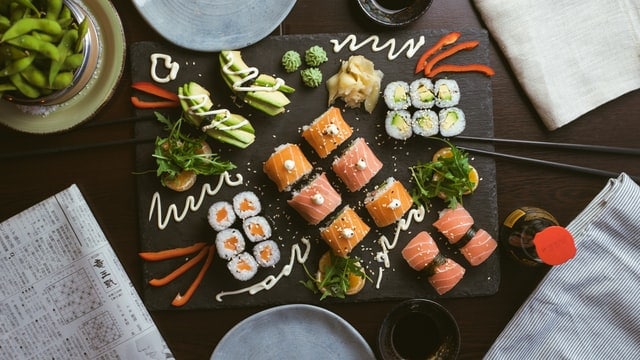 Covid restrictions have hit Munich again and the stores are closed. Who still doesn’t want to miss out on good food or is already prepared for the lifting of the restrictions is perfect right here: Today we are talking about the best Sushi restaurants in Munich, we’ll tell you who delivers the best Sushi in Munich right to your doorstep and doesn’t want a lot of money for doing it.

It is in Munich too, or even more so in Munich, definitely not hard to find a good Sushi place. It doesn’t matter, if it is delivery to your house or right in front of it, there’s enough Sushi. Therefore, the difficulty is not to quickly find Sushi in Munich, the challenge is to find good and cheap Sushi Restaurants in Munich.

With this list, which is not written in any particular order, nor claims to be complete in any way, we are aiming at helping you with your quest to find the best Sushi Restaurant in Munich!

The KOI on Wittelsbacherplatz – Modern, Hip and delicious Sushi

The KOI ticks two boxes on our list right away: It’s really delicious Sushi and the store has a delivery option on “Lieferando”. The third box, the small price, can’t be ticked by the KOI. The comfy and modern atmosphere more than makes up for that. All the while the service is also great, while the taste is enticing, and capturing right out the door!

Where is the KOI? Wittelsbacherplatz. 1, 80333 Munich
Reserve a table right away!

There’s something about the Kaito, there’s no denying that, it’s just that we’re a little unsure exactly what it is. Don’t misunderstand us, these are definitely good things! When you come in here, through the heavy and sturdy wooden door, you don’t really know whether you’ve popped into a Bavarian-style inn or a traditional Japanese-style restaurant. With the heavy and dark wooden decor and tables, it could definitely be Bavarian. However, the staff is definitely dressed traditionally Japanese and you can even sit on the floor. Besides the decor, the staff and the seating, the sushi is one of the best in Munich! Delivery is not available, while the prices of the Sushi are quite wallet-friendly.

Where is the Kaito? Gabelsbergerstraße 85, 80333 Munich
Here you can find the Menu!

The SUSHIYA Sansaro close to Univeristy – Delivery available and quite cheap

The Sushiya is the first restaurant on our list that ticks all boxes. Since 2007 the Sushiya is established closed to the University-Subway-Station. It encompasses traditional Japanese kitchen as well as creations that were designed more for the German taste. The ambience is naturally tasteful, and offers, next to the comfortably lit inside areas, outside areas as well. Delivery is available for you from Tuesday until Sunday, between 5.30 pm and 8.30 pm (sometimes even longer).

Where is the Sushiya Sansaro? Amalienstraße 89, 80799 Munich
You can order directly here!

The ASAKA close to University – All you can eat Running Sushi

Okay let’s say it right away: The ASAKA is nothing special, but it is cheap. We put it on the list, because, it is actually very nice to know a place in that area that offers good (to acceptable) and really cheap Sushi. For half an hour during lunch hours you can eat as much as you can for only 10 €. All you can eat Sushi in Munich is (at least in this area) quite unusual, most of all for such a cheap price. Otherwise, except for the comfortable, but not spectacular, atmosphere, ASAK is really nothing too special. It is perfect though for the low budget lunch.

Where is the ASAKA? Amalienstraße 39, 80799 Munich
Here you can check out the Menu!

You can find the Sushi + Soul in the middle of Glockenbachviertel near Frauenhoferstraße subway station. No matter where you look for sushi in Munich on the internet, or which Munich sushi fan you ask, everyone will recommend Sushi + Soul. Rightly so, we think. Sushi + Soul praises itself as one of the “best sushi restaurants in Europe”, but it is not just a sushi restaurant. At the bar there is a huge and delicious selection of Japanese whiskey and rum from all over the world. A wine seminar, rum tastings where you can sample rum and sushi homecooking classes are just as much a part of the program as a delivery service. The fine restaurant is not really inexpensive, but it’s still worth it and you’re guaranteed to get your money’s worth.

Where is the Sushi + and Souls? Klenzestraße 71, 80469 Munich
Here you can take a look at the Menu, check out the courses and tastings or order directly!

Now it gets really fancy. But, we said it already, that Sushi is in a class for itself and that it is not unusual to pay quite some money for a good dinner. In Mun on Wiener Platz you will probably have to put quite an amount of money on the table, but you will definitely get a very good Sushi in return. Four or six courses accompanied by selected and fitting wines are on the menu here. As we said: Gourmet!

Where is the Mun? Innere Wiener Straße 18, 81667 Munich
Here you can reserve a table at Mun!

Maggie Sushi on Viktualienmarkt – It gets really cheap in the end

Right on Viktualiemarkt there is Maggie Sushi with a red and black décor and Manga-styled furnishing. Here you can get a quick Sushi platter for take-away and really leave almost nothing in return. In Maggie Sushi you can get six rolls for not more than 4,50 €. That is virtually nothing, most of all in comparison to the restaurant we mentioned earlier.

Where is Maggie Sushi? Westenriederstraße 13, 80331 Munich
Take a look at the Menu right here!

Sushi in Munich – Everything from cheap to very fancy

Hopefully this list will help you in your search for the best sushi restaurant in Munich. We had a lot of fun trying out the different sushi places and it will help businesses during this difficult time – bon appétit!