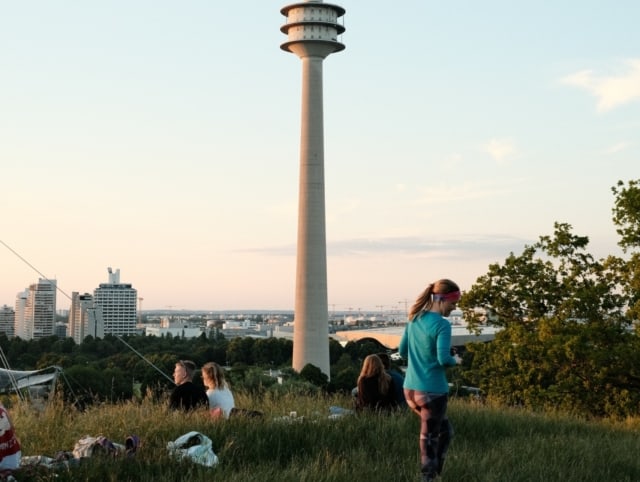 In past articles, we have already taken a close look at some of the best day-trip destinations around Munich. Today, we want to compile something like a best-of of those places in and around Munich that we think are worth visiting. Therefore, this list will not be divided into clear-cut categories, but rather try to offer a general overview for interested tourists. One thing we will of course take into consideration though: It is hot and a cool-down is always appropriate during the summer in the city.

Let’s start with the classics. Downtown Munich is known for the town hall, with its bell tower sporting the dancing Schäfflers, the dome, Viktualienmarkt, and of course the Hofbräu beer hall. Every tourist that comes to Munich will probably want to see these sights. For good reasons.

The town hall with its bell tower

What we call the town hall today is in reality the new town hall. The old town hall is a little less known and a little less spectacular at the same time. It’s on the east side of Marienplatz and hard to miss. In this tower, there are no bells, but a museum that exhibits historical toys.

Now, let’s get to the “actual” town hall. It was built only as recently as the year 1905 by the only 25 years young architect Georg von Hauberrisser. The same architect who also built St. Paul’s church next to Theresienwiese. This church, or more precisely, the peak of its church tower, was involved in the tragic plane crash in the year of 1960. We have covered the crash in more detail in our article about the Westend.

The carillon in the bell tower of the town hall shows the wedding of duke Willhelm the fifths to Renate of Lothringen in the year 1568. On that special day, in honor of the newlywed, jousting was held in the town square. The Munich knight won that tournament and is celebrated for that achievement until today in the bell tower every day.

Under the wedding scene, you can observe the Schäfflers dancing. Legend has it, that after a heavy plague epidemic in Munich, in 1702 the Schäfflers (which is an old word for barrel coopers) were the first to go back out into the streets. They came out dancing and wanted to calm the population. They somehow marked the end of the epidemic. Since then they have been dancing every seven years. The exact origin of this legend is somewhat mysterious, as there are some indications that the Schäfflers indeed weren’t related to the plague at all. Nevertheless, the story stuck, and today is even being taught in school.

May 2022, the Schäfflers are dancing again, not related to their seven-year cycle, but to mark the “end” of another, this time, pandemic. They called it the “dance for life”. In the bell tower, they dance every day.

There are tours available through the town hall. During all of the season, you can book tours that will include the panorama platform and the “Bayern Balcony”. You only have to sign up on the website of muenchen.de, where you will also find more information and exact prices.

The balcony of the town hall is known for the football team of Bayern München celebrating their championship here (I almost said, once a year). Of course, this party doesn’t happen every year, since Bayern doesn’t win the championship every year. Even though since 2012/13 it has been every year.

The three seem so inseparable today, so much like carved out of the same tree, as if they were meant to be together since the beginning. At least they seem so today. In a way, they are inseparable, even though they were never planned as such. They only all originate with the same king or better queen.

Today, the Oktoberfest is the biggest folk festival in the world. To get to this point it had to undergo several hundred years of development. We will look at that closer in the near future, in an article about the history of Oktoberfest. Now, we will only mention that in the year of 1810 originally it was a horse race honoring the wedding of Ludwig the first and Therese von Sachsen-Hildburghausen. The event was organized by a civil defense unit, which shortly after requested at the king’s court, due to the high popularity in the population, to repeat the event the following year. The request was approved, and a tradition was born.

Theresienwiese became part of Munich already in the year 1804. Even though, just a formal part. Because, in these days and six years later, at the time of the “first Oktoberfest”, it was still true to its name (Wiese means meadow in German). Only in the following 20 years, the area around Theresienwiese was slowly being built on. Which is why the city bought the privately owned farmland that made up Theresienwiese and thus secured until today the huge free space in what is the city center nowadays. Of course, Theresienwiese is named after the wife of Ludwig the first who he married there. Today, Theresienwiese is by no means a meadow, it is mostly made up of concrete. But it is still over 42 hectares big and all year round open and offering sporting facilities.

Bavaria is iconic, stunning, and hollow. Hollow? Yep, Bavaria is hollow and even completely empty-headed. Behind her forehead, there’s nothing, except a small room with a bench, that you can reach by climbing the winding steps through the body of the statue. Until the beginning of October, you can enter Bavaria for the actually quite cheap price of only 5 €.

Downtown Munich has quite a number of other sights to offer. All of which are worth a visit. We will only mention them shorty here, but we have discussed them at length in our article about the best sights in Munich:

For finding out about the perfect cool-down after walks through the city, you can read out articles on the best ice cream in Munich. If you are less feeling like a culinary cool-down, and more like jumping into cold water, or at least having your legs cooled in the water, you can either check out the best outdoor pools in Munich or our list of the places along Isar.

Outside of downtown Munich, at times even beyond the city limits, there are of course more sights and attractions. The following list will look at these. The items on the list stand out through their ability to deliver cool-downs through shadow and forest air. Some of which we have already mentioned in our list of the most beautiful bike routes around Munich, so check those out as well!

Castle Nymphenburg is by itself already a stunning echo of the Bavarian monarchy. It offers tours in which tourists can marvel at the pomp and splendor on the inside of the castle. Nevertheless, even the park is worth a visit. On the far stretching meadows and in sometimes seemingly wild forests relaxation is a given. Doing sports, playing with kids, or child-friendly bike tours are just as easily possible.

Only 10 km away from the forest cemetery (Waldfriedhod), which is around 30 min by bike, and 16 km away from the main train station, which is an hour by bike, Forsthaus Kasten is the perfect destination for a day trip. You can choose the route in a way that will only (or mostly) lead through fields and forests. It won’t get too exhausting that way and stay beautiful and scenic. At the forester’s lodge itself, there’s a labyrinth in a corn field, a playground for kids, and a beer garden for grownups that is perfectly suitable for childless family trips as well.

The way to the forester’s lodge will lead you through Park Forstenried as well because the lodge is actually right in that forest. Not always completely coherent, the “park” (which is actually quite a big forest) will go as far as lake Starnberg. If you want to go all that far is, of course, up to each individual. You could also take easier temperatures inside the forest and rest or make a picnic right there. There are several beautiful spots inside the forest perfectly suited for just that.

The English garden is a Munich symbol in its own right. As one of the biggest inner-city parks in all of Europe, the English garden, of course, is a tourist attraction. Although, it draws tourists and Munich’s people alike. Among others, the English garden is famous for the Mono-meadow, the big meadow on the foot of the Monopteros. Here traditionally people charge their sun batteries nakedly, which is why it’s also called the naked meadow. The Monopteros, the Chinese tower, and the teahouse are other sights inside the park.

Planned and planted was the park already in 1789 by soldiers of the Bavarian army that were stationed in Munich. Similar projects were done in many other Bavarian cities to keep the soldiers occupied in times of peace and create value for the public at the same time. The name English garden came about as a distinction from the French gardens of the time. The French gardens were very planned and symmetric, while English gardens were closer to nature and “wilder”. Until today the English garden has stayed a natural garden.

Munich’s sights and way of life

The dubious reputation of Munich as the city of the “rich and famous”, will likely not disappear any time soon if you look at the ever-rising rent and living costs. Probably, it will expand on that reputation, rather than shedding it. That being said, Munich does have, let’s call it a version, of the typical Bavarian easiness. Especially present is that mindset in some places in Munich that we have described in our list of alternative sights in Munich.

Hackerbrücke has developed into a popular chill spot for many people in Munich. From here you can perfectly watch the sunset (or sunrise) over the “skyline” and main train tracks of Munich. Sitting on the steel beams of the bridge it is perfectly comfortable with a Munich beer of your choosing.

Somewhat surprising to all those who know Munich for its expensive and bourgeois reputation, and not a day late for all that spend their youth in the city, in the last years there has been (sped up by the pandemic) a growing rave culture in the city. What started as cat-and-mouse games by organizers of mini-festivals and raves and the (everywhere in German notorious for their harshness) Bavarian police, has developed into a youth movement that is fighting for free and musical spaces in the city.

The illegal raves under (here unmentioned) big motorway bridges developed into demonstrations, so-called “loudness parades”. Legal demonstrations in the form of dance events in public spaces such as Theresienwiese or Königsplatz spread the demand of young people for free spaces out of the dark illegal underground into Munich’s public consciousness. The hide-and-seek game nevertheless continues and with that Munich’s musical subculture continues to take spaces that the legislative is not (yet) giving them.